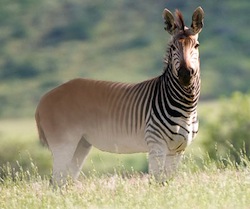 Paardeberg derives its name from the “quagga” zebra that was once endemic to the Western Cape’s renosterveld. The quagga was hunted to extinction in the 19th century, but selective breeding programmes have now been able to concentrate the “quagga gene” and produce a zebra that is similar in appearance to the extinct “quagga”. The Paardeberg region is one of several areas identified as potential breeding sites for Equus quagga quagga by the Quagga Project SA.